The Real Variable That Is Predicting Realignment

If you’ve been following politics, you may have heard the phrase “density polarization” to refer to the new political realignment. Derek Thompson of The Atlantic even referred to it as the “destiny” of the new coalition. This refers to the fact that rural areas are consistently voting more Republican, while cities are voting Democratic. At Cygnal, however, we dove deep into the numbers and discovered that there is another variable at play beyond just how many neighbors you have: growth.

As Trump and other Republicans make headway with urban and minority voters, density polarization does not explain the whole trend. We’ll take a look at this today in the state of Virginia, which has the most high-profile governor’s race this November. The map below shows the change in population by county between 2010 and 2020 from the new US Census numbers. Blue means the county grew in size while orange, typically found in the more rural Western and Southern portions, means that the county shrank. 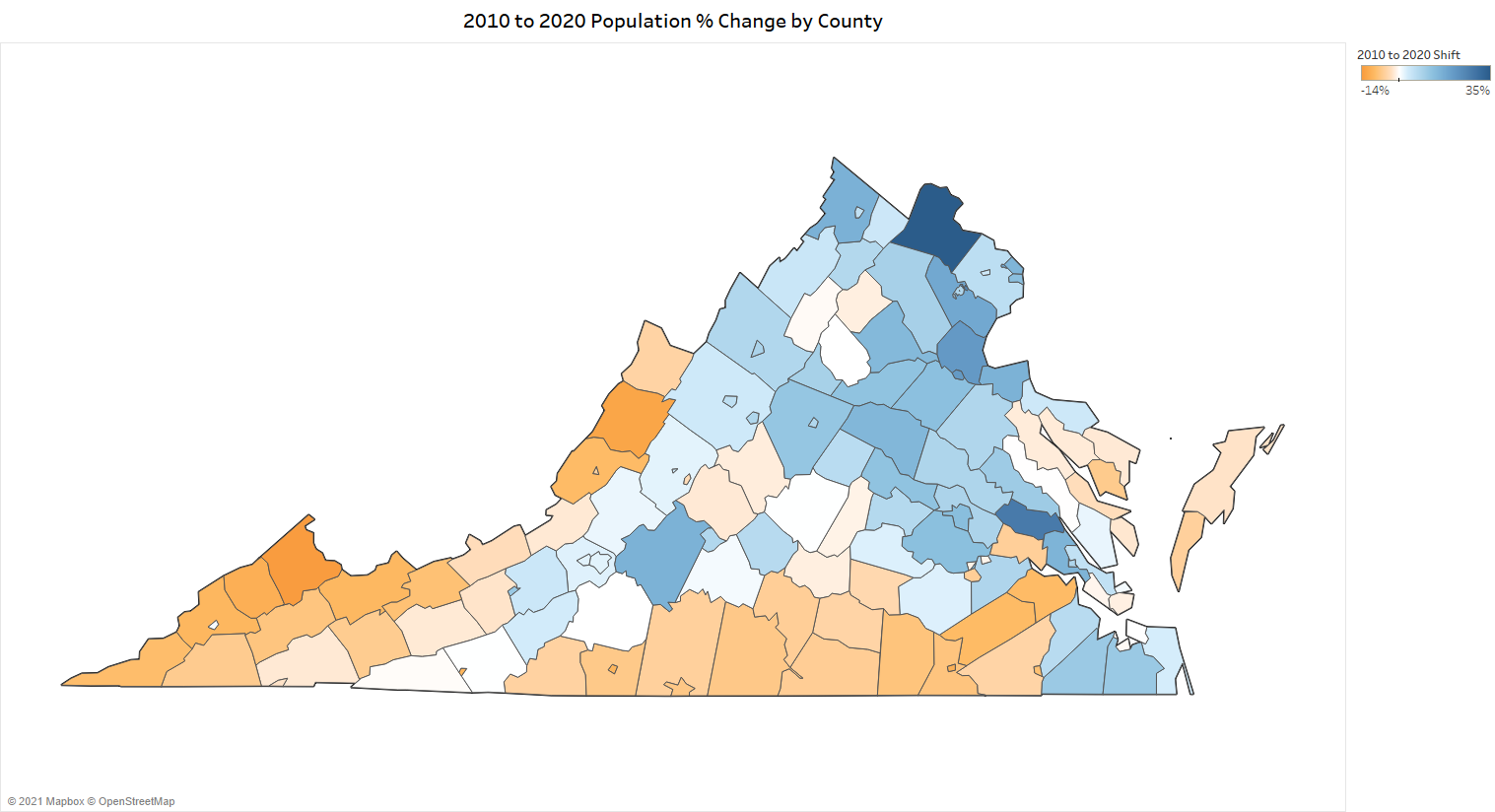 This map is a great illustration of how the Northern Virginia area has grown in electoral importance as it makes up a larger share of the voters in the state. The larger cities still vote Democratic but if density polarization is the driving factor, we would expect more shifts to the Democrats in the cities and Republicans in the rural areas.

The table below plots the total number of people in a county on the x-axis by the shift in the presidential margin since 2012 on the y-axis. This change is seen from a Republican perspective. As one moves up the chart, the dots become more red, indicating that there was movement towards the Republican side. The blue dots show a shift towards the Democrats. 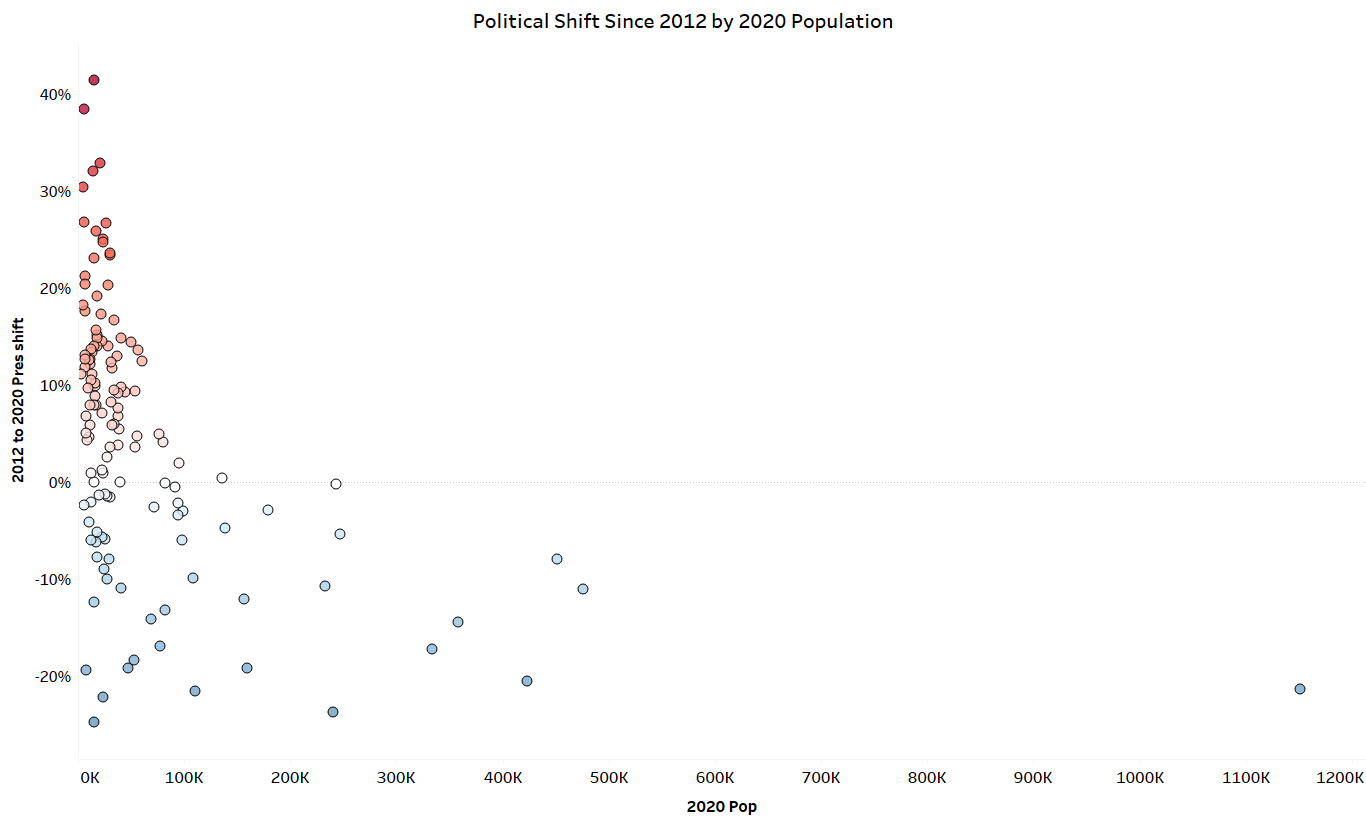 Looking at this graph, one can see several things that stand out – the most obvious being there is no clear line between the two where it doesn’t fit into a clear line. Several smaller counties are moving to the left, while medium-sized counties are scattered all over the place with some barely moving towards Democrats. The next chart ignores the total number of people and instead plots the population change since 2010 on the x-axis. Movement to the right indicates a growing county or city and movement to the left means there is shrinkage in size. 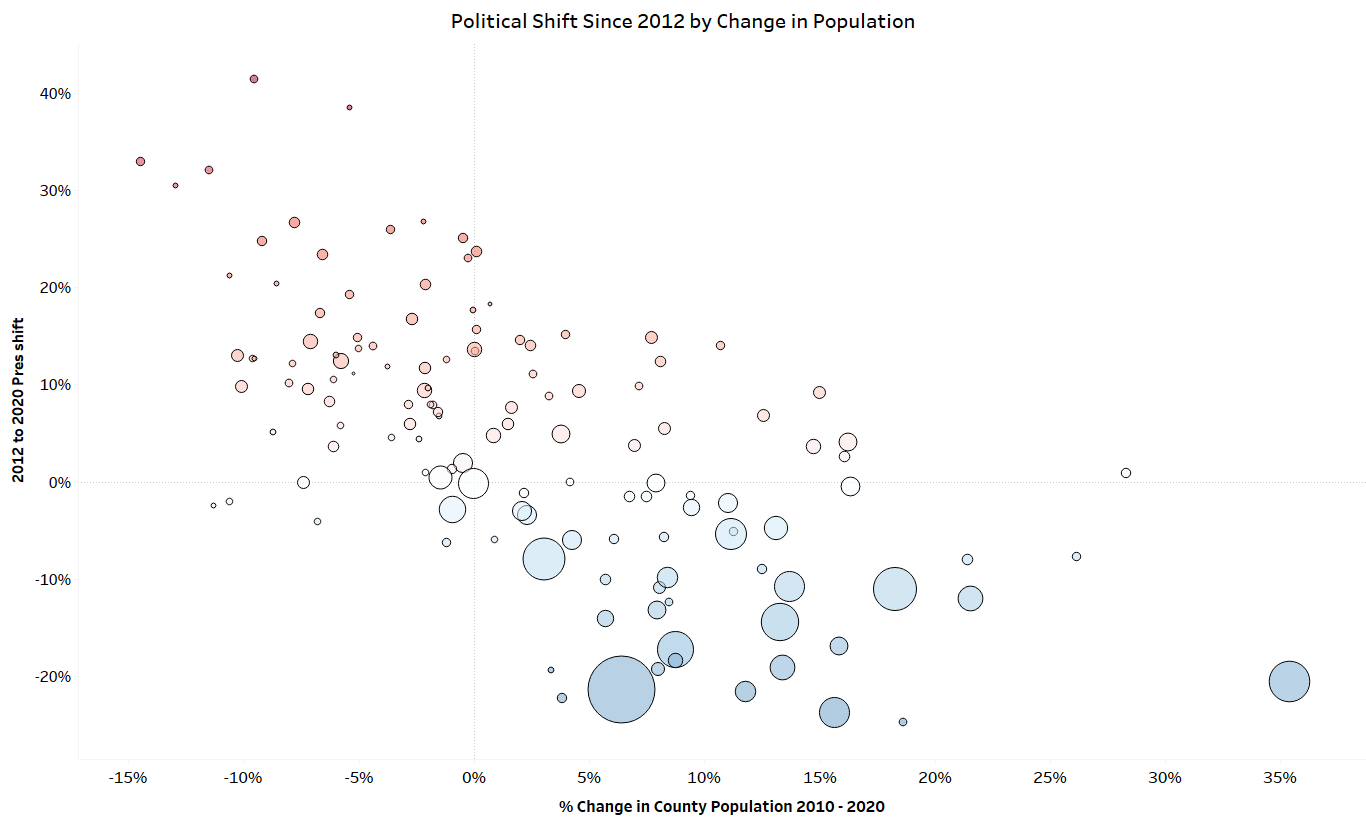 This trendline is much clearer than the previous graph, showing where Democrats are gaining in areas that are growing and where Republicans are picking up support in stagnating or declining counties. The starkest contrast between the last two graphics is apparent in the cluster around 0% each way which includes areas such as Norfolk, Newport News, and the city of Hampton.

In the upcoming Virginia gubernatorial race, keep an eye on this trend over a simple rural/suburban/urban split and keep in mind the population change. When comparing two areas that have a similar number of people, note that density is not the ultimate, defining factor –  growth is.